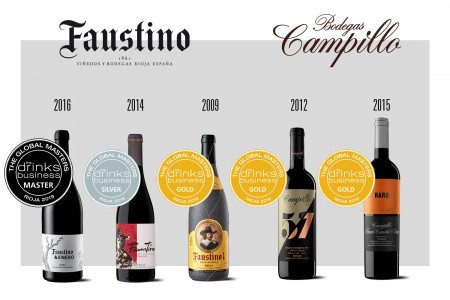 Grupo Faustino celebrates its success. The British magazine, “The Drinks Business”, with huge international outreach, a benchmark in news and trends related to the world of wine, beer and liqueurs, awarded Rioja Masters Prizes 2019 to five medals by Grupo Faustino.

The magazine produces a report every year on the best wines and leading styles from La Rioja, in the most complete blind tasting event in the United Kingdom, and at this edition only 26 Gold Medals were awarded.

Among the Rioja reds that were awarded prizes at this edition Faustino & Eneko 2016 were particularly successful, a tribute to the Spanish five Michelin star chef, Eneko Atxa.

This wine was awarded one of the six Master prizes that the panel of judges presented this year, which are only given to outstanding wines.

It is a signature wine made from Tempranillo and Graciano grapes, aged for a minimum of 8 months in new French oak casks. This allows for perfect blending of the red fruit and cask, making a powerful, flavour-filled wine with hints of tanned oak that stand out from the slightly spicy taste.

Furthermore, Faustino I Gran Reserva 2009 was awarded the Gold Medal. Almost 60 years after it was first made, it is still one of the most famous faces in the wine world, and an icon in over 130 countries.

Campillo 57 Gran Reserva is a wine that is made in honour of the fourth generation of the Martínez Zabala family, which currently manages the winery. It is a red wine made from Tempranillo and Graciano grapes, aged for 24 months in French Allier oak casks.

It is extremely well-balanced and smooth in the mouth, with a full, meaty, long-lasting aftertaste.

Campillo Raro Finca Cuesta Clara, on the other hand, is a red wine made from the Tempranillo Peludo grape variety, which for a long time had been left to one side because of its very low productivity, although Grupo Faustino has always kept a small vineyard of this variety. After 26 months ageing in French oak, the result is a very expressive, modern wine, with flavours of ripe black fruit with spicy hints and flecks of vanilla and liquorice.